Beavers are incredibly industrious creatures and incredible builders and they certainly do create some incredible structures. 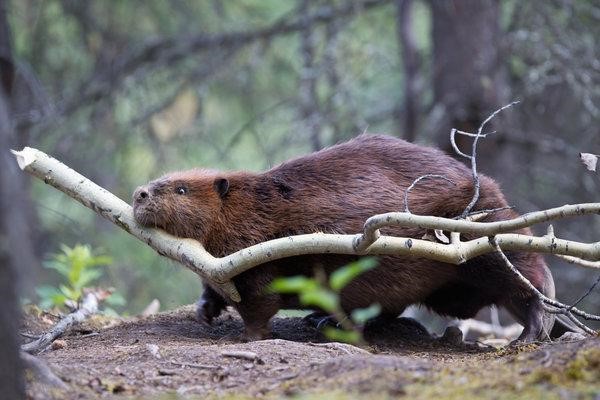 First off, they look for an area of the river that is slow moving. Which is a very sensible approach. The also pick out the most shallow parts. They do not want to make life hard on themselves obviously. This will allow a decent build-up of water so that they can hide themselves and the ice will build up to much and break the structure. They begin with the selecting wood that they will need and start to gnaw away at the pieces shaping them to the dimensions they now they are going to need. This appears to be a natural instinct that they have developed over years of evolution. The wood blocks the flow of the river enough to start backing up the water. At this point the beavers begin to plug the gaps the dam with smaller twigs, foliage and more gnawed wood so that the water will trickle through and that the structure is strong and supported. The structure can reach up to 5 feet with the water area getting to be of a depth of anywhere between 1.2 and 1.8 metres ideal for the beavers needs.

By the side of the Dam is the beaver lodge. This will be its home and it will use the dam for its survival and existence. The Dam will provide everything it needs. Ture the engineers of the river they will even construct canals the float and channel food into or near the lodge so that they can reach it without having to travel far. They are the most resourceful of animals and have shown an adaptability similar to our own in that they can work with the surrounds to find that place where they can develop a home.

This can have a negative effect for farmland as it can cause a lack of water further down the stream that is needed for crops, but it can also cause a mini flood at the other end of the beaver dam as well. There have been cases of road subsidence attributed to the beavers Dam. Not only roads but it appears that even bridge and railway lines have also suffered as a result. There is an issue here that humans need to resolve as we cannot and should not remove the ability of the beavers to build. More ecological damage could be wrought if they cannot build thee dams. Therefore, the usual approach is to relocate the beavers to another stretch of river or place low wattage electric fences to deter them from areas where a dam will cause an issue. It would be rather handy to have your own selection of beavers at home if you have a Wood burning stove from a Stoves Northern Ireland company at links including stovebay.com/stoves#.xlct9-hkhpy.  The beavers could give you a lifetime supply of perfectly cut wood to put in it.  Perhaps though we should leave the beavers in their natural environment and just source the wood.